Sports journalists and fans are always speculating about who will retire when, how long they will play and what team they’ll be playing for. But sports broadcasting legend Al Michaels has a different outlook on retirement. He’s not retiring, he says because the 2022 Super Bowl is the final game of his career in football.

Al Michaels has been the voice of Monday Night Football for almost three decades. He announced his retirement from the sport on September 3rd, but he has not yet called his final game. As a result, tonight’s game is likely to be Al’s last broadcast. 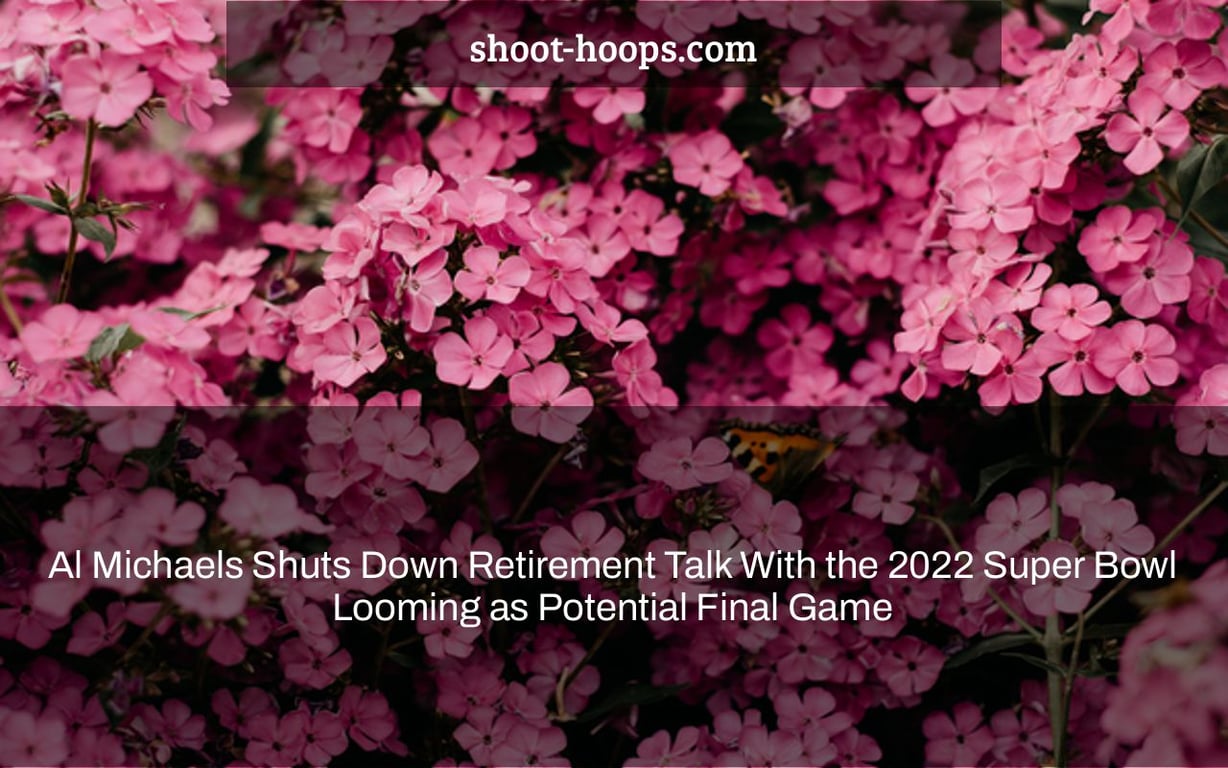 For a long time, Al Michaels has been one of the most well-known voices in football. As he and Cris Collinsworth prepare to announce Super Bowl 56 between the Los Angeles Rams and the Cincinnati Bengals, speculation continues to swirl over whether this will be Michaels’ last football game call.

After The Big Game, his contract with NBC expires, and he has never stated his plans. Michaels’ retirement from the business would not be shocking at the age of 77. However, in the days leading up to the Super Bowl, he quickly shot down any notion of retirement, maybe implying that he intends to keep doing this for at least another year.

The Pat McAfee Show has continuously brought on a ton of guests during the football season. Leading up to Super Bowl 56, they brought in Michaels and didn’t hesitate to ask about his expiring contract.

Michaels, on the other hand, put an end to any speculation about his retirement with a simple response.

“This year, all I wanted to do was enjoy the heck out of the season.” I didn’t want to be distracted by anything, and I’m still trying not to be. Obviously, there is something out there; I have alternatives, and I still like what I do. I don’t want to take a step back.”

Michaels doesn’t seem like he’s thinking about retiring, and why would he?

He claims that he has alternatives, and that even at the age of 77, he is one of the finest in sports history, and that he plans to call football games next season.

The issue now is where Michaels will go now that his contract with NBC has expired.

Michaels should have a lot of deals, including one from Amazon that is rather large.

Al Michaels talks about his NBC Sports contract coming to an end after the Super Bowl.

“I like doing what I do.” I’m in terrific shape. On an NBC press call, he declares, “I’m not ready for any rocking chair or golf.”

Michaels will be a free agent after this season. That sounds strange, but we knew something like this was going to happen.

Nonetheless, if they haven’t already, Michaels’ offers should start coming in, and based on what Michaels indicated about having “options,” there are likely offers on the table.

Amazon looks to be the frontrunner to get Michaels, and it’s been claimed that with the acquisition of Thursday Night Football rights, they’ll throw a large contract at him (h/t Marchand, Andrew of The New York Post).

According to insiders, Michaels has a long-term deal with Amazon Prime Video for up to $11 million each year.

Michaels has alternatives, and after Super Bowl 56 is over and his contract with NBC expires, he should have even more.

Michaels was even mentioned as a possible comeback to Monday Night Football broadcast on ESPN. However, beating Amazon’s rumored $11 million annual offer would be difficult. Furthermore, with the new ManningCast, ESPN has had nothing but success, so they may not need to toss the bag to get Michaels.

Nonetheless, Michaels has alternatives, and he has said that he wants to announce football games before the start of the following season. That’s a win-win situation for everyone.

The veteran announcer will call his 11th Super Bowl of his career, and he hopes to make it number 12 in 2023.

Michaels has become one of sports’ most famous voices, thanks in large part to the Super Bowl. When the Rams and Bengals meet in Super Bowl 56, it will be Michaels’ 11th Super Bowl appearance, and most likely his last with NBC — but anything might happen.

Michaels has a special connection to the Super Bowl. He was there for the first one in 1966, and he’ll be announcing Super Bowl 56 this year. The last time the Rams won the Super Bowl, Michaels called it.

However, according on what he previously said, this will most likely not be his last one.

Even if Michaels joins Amazon, NBC will almost certainly offer him a side position, and he should be a viable contender to announce the Super Bowl. What good are huge football games if Michaels isn’t announcing them?

Enjoy the voice of Michaels as Super Bowl 56 kicks off, since no one knows what the future holds. Sure, he reiterated that he doesn’t want to retire, but we heard the same song and dance from Tom Brady all year until he announced his retirement from the NFL after 22 seasons.

Perhaps Michaels will change his mind and follow Brady’s lead. Or, if we’re fortunate, he’ll return in some form for at least one more season.

AL Michaels of NBC attended the first Super Bowl and will set a new broadcasting record in the 56th.

Kobe Bryant Won MVP in 2008, but He Thanked a Higher Power For Sending Him Pau Gasol