After a challenging first season in New Orleans, the Knicks are on their way to return to the Eastern Conference playoffs. Porzingis has returned with a vengeance and despite his freakish athleticism is a strong defender that can guard multiple positions. This will be an exciting team if they can stay healthy going into next year. 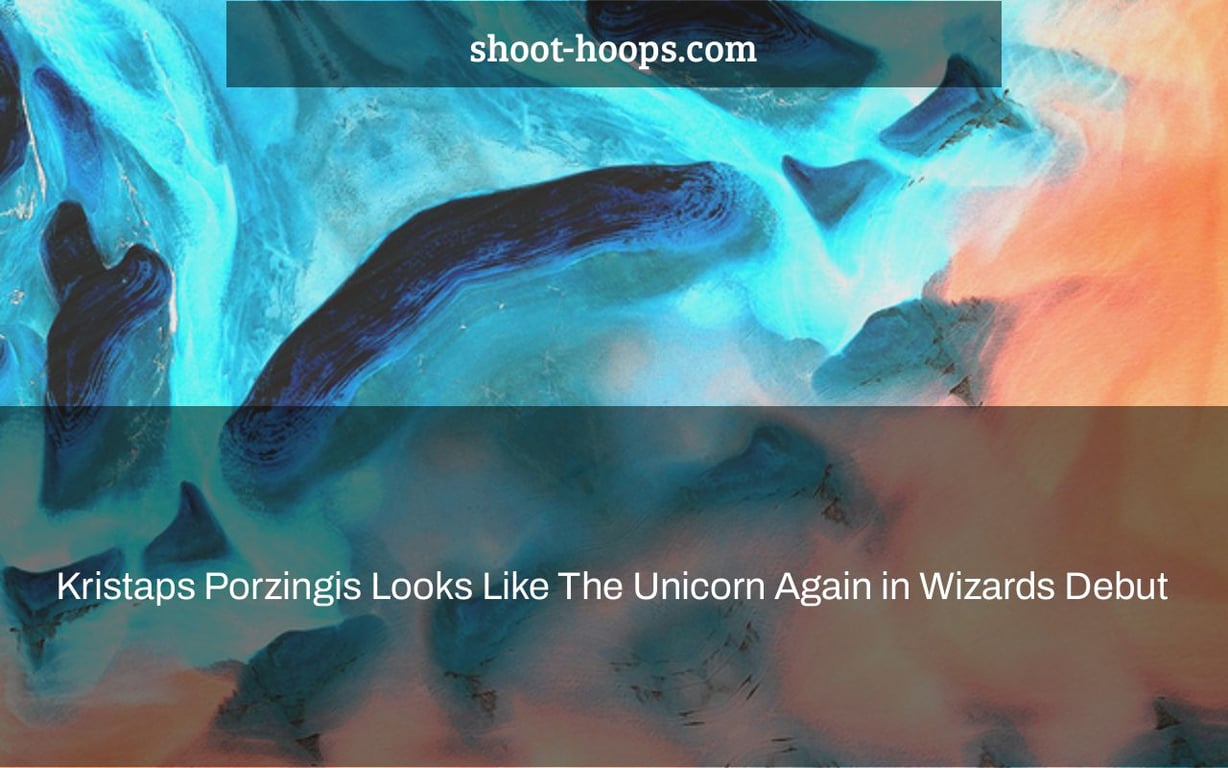 The Washington Wizards’ late-season signing of Kristaps Porzingis seemed to be a last-ditch attempt to acquire another star-caliber player to complement Bradley Beal. However, much has been said about whether Porzingis still deserves to be called a “star.”

In his Wizards debut on Sunday, KP looked a lot like The Unicorn of old. For a Washington squad desperate for even a glimmer of momentum, it means everything.

The Wizards may struggle to qualify for the NBA play-in tournament, particularly with Beal out after having season-ending wrist surgery. A good finish from Porzingis, on the other hand, might decide Beal’s willingness to sign a max agreement with the team this summer. That seems to be considerably more important than a one-and-done play-in spot.

Kristaps Porzingis had a strong start for the Wizards.

Porzingis acquired the moniker “Unicorn” for his ability to accomplish almost anything on a basketball floor as a 7-footer. He displayed the complete range of his abilities against an entertaining Indiana Pacers club on Sunday.

The 26-year-old scored 25 points in little over 21 minutes of play after missing 14 consecutive games due to a knee ailment. Porzingis made 7 of 12 shots from the field and 3-of-4 from beyond the arc, while also going to the free-throw line 10 times and blocking two shots on the other end.

In his return to the hardwood, the Latvian big man looked sprightly. On Washington’s first possession of the game, he even flashed for a lob, and in the second quarter, he had a spectacular chase-down block on Pacers wing Oshae Brissett.

Porzingis seemed more at ease as the game progressed, scoring 15 of his game-high 25 points in the second half. On catch-and-shoot triples, he showed no hesitation and made the most of his post touches. On rim runs down the stretch, he scored many crucial baskets.

The Wizards would want to see Porzingis in this confident, springy form in the future.

Porzingis can demonstrate his worth as a second star.

After a game against the Indiana Pacers on March 6, 2022, Kristaps Porzingis celebrates with supporters | Scott Taetsch/Getty Images

Kristaps Porzingis isn’t without flaws. For someone his stature, he’s a poor rebounder, and his rim-protecting instincts have faded in recent seasons. The injury history is still front and center.

Porzingis, on the other hand, demonstrated on Sunday why he may eventually be a complimentary second star to Bradley Beal.

With his ability to shoot from the perimeter, the Unicorn helped the Wizards spread the floor more efficiently. Washington took advantage of the open court, hitting 17-of-42 (40.5 percent) from beyond the arc, while also attempting 32 free throws and dishing out 33 assists. Former Wizards forward Davis Bertans had previously described the team as dysfunctional, but it looked everything but in the victory column.

Porzingis does really open up a lot of doors for Washington. His improvements on the low block make him a greater offensive option than Daniel Gafford and Thomas Bryant in that aspect, while his outside shots offer the Wizards a more menacing feel. He doesn’t bring much to the team’s defense, but that’s been a problem for Washington for a long time.

Porzingis’ potential as a second star may mean everything to Beal in the long run.

Due to a lack of space and shooting, the Wizards’ combo guard (when healthy) had trouble getting to his mid-range areas. If Porzingis can deliver both on a semi-regular basis, Beal should have greater freedom to target on-ball opponents at his leisure. Porzingis, unlike Washington’s previous big men, isn’t paint-bound, which gives Beal and the Wizards’ ball-handlers more room.

However, all of this is supposing that Beal re-signs with the Washington Redskins this summer. Porzingis’ late-season performance might also be a factor.

Bradley Beal might be persuaded to accept a $246 million deal if KP is healthy.

Beal recently said that it’s “reasonable” to believe that he’ll sign a $246 million max deal with the Wizards this summer. Porzingis has a chance to influence Beal’s future.

Porzingis was rumored to be a probable option to sit out the rest of the season if the Wizards choose to tank after his trade to Washington. Head coach Wes Unseld Jr., on the other hand, said that KP will make his debut whenever he was healthy.

That debut has arrived, and it was spectacular. What if a healthy Unicorn has a strong finish and leads the Wizards to the play-in tournament? Could Porzingis flash enough to make an impact on Beal and the rest of his new teammates even if he doesn’t?

Porzingis’ collaboration with Luka Doncic did not work out. However, he has a clean slate in the nation’s capital and can quickly persuade Beal that he has what it takes to convert the Wizards into champions.

The “porzingis age” is a basketball player who was born in Latvia. He plays for the New York Knicks and has been compared to NBA superstar Kristaps Porzingis. In his first game back from injury, he put up 23 points and 10 rebounds in just 29 minutes of action against the Washington Wizards.

What it Means for D.K. Metcalf