In the final month of his career, Larry Bird was on half-a-back. That’s how bad his back problems had gotten: he still managed to compile a triple-double during that stretch. In an interview with Sports Illustrated before his retirement, Bird said “I don’t know what I’m going to do when basketball is over because it’s been my whole life.” Less than two decades later, the NBA retired number 33 in honor of him and now he ranks second all time in total games played at 1128. 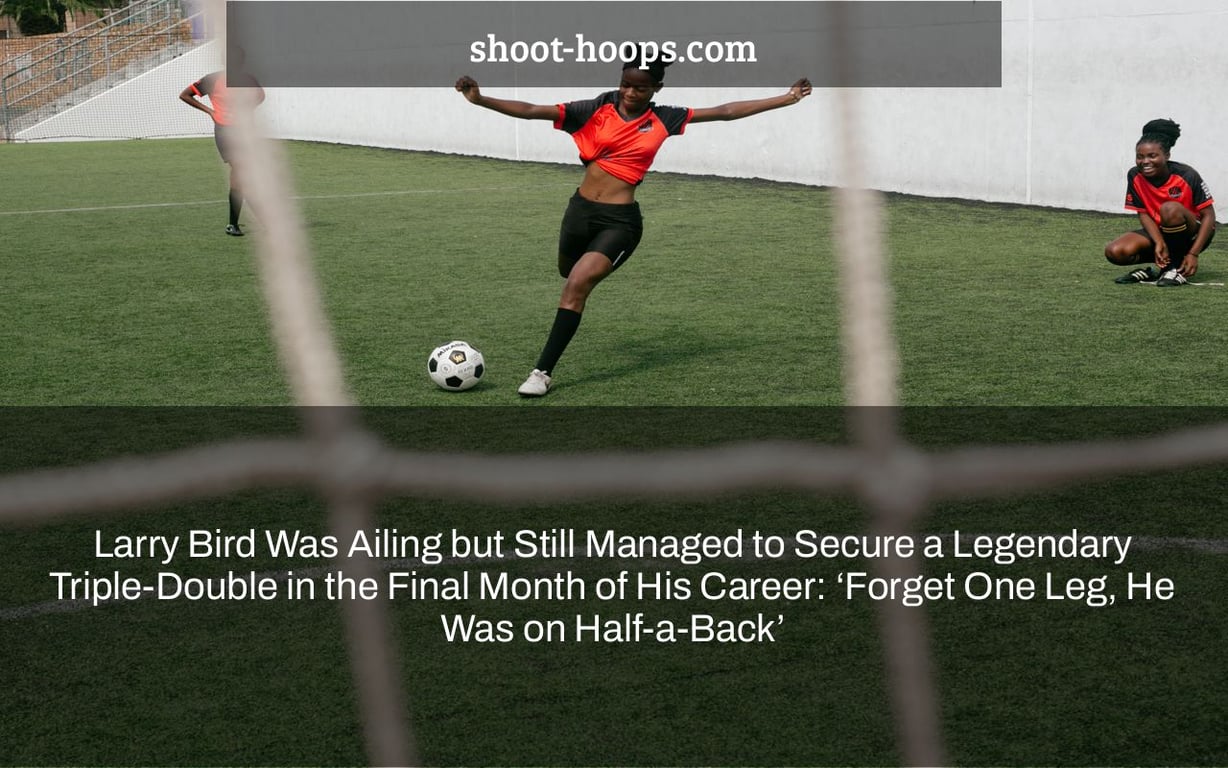 Few players in NBA history have surpassed Larry Bird’s achievements. Bird won three MVP Awards and three championships with the Boston Celtics in 13 seasons, among many other honors. His career, though, is a constant reminder that you can’t play forever.

While LeBron James is in his 19th NBA season and is putting up MVP statistics, Bird only lasted 13 seasons, owing in part to back ailments that plagued him for years. His anguish became more apparent with each passing season until he retired in 1992. Nonetheless, only weeks before his last professional game, the 35-year-old put on one more show to remember.

In a double-OT thriller, Larry Bird recorded his final triple-double.

Maybe it was just bad luck for the Irish. The Celtic great, however, put on a spectacular on March 15, 1992, two days before St. Patrick’s Day.

Bird and the Celtics were playing the Portland Trail Blazers, who came into the game with a 46-18 record. All season, the Hall of Famer battled his back, succumbing to it for two months until returning on March 1. He has also been struggling at times, coming into the game only four days after a dismal 10-point performance on 4-of-15 shooting.

Vintage Larry Bird, on the other hand, had one more amazing game in him.

Bird scored 49 points on 19-of-35 shooting in 54 minutes in a marathon that took not one, but two overtime sessions. The Hick from French Lick, who was wearing a plastic back brace, also had 14 rebounds and 12 assists, giving him his 59th and last triple-double of the season. For good measure, he also collected four steals and a block.

Boston won a thrilling game 152-148, but Larry was the story of the night. It was his highest-scoring triple-double of all time, topping his previous best of 47 against the Trail Blazers on Valentine’s Day in 1986. That’s not all, however. It is still the most points scored by a Celtic in a triple-double game. Since then, only James Harden and Russell Westbrook have been able to score 49 points or more in a triple-double.

Rick Fox, a former Boston Celtics forward, recounted what it was like to witness Bird.

During a game, Boston Celtics’ Larry Bird sits on the sidelines in front of the scorer’s table. | Getty Images/Bob Stowell

Rick Fox was picked in the first round by Boston in 1991, and is best known as a three-time champion with the Los Angeles Lakers. Larry’s 13-year veteran was able to receive a firsthand glimpse at what he was going through, especially his aching back.

On The Dan Le Batard Show with Stugotz, Fox remarked, “I was Larry’s rookie, so I got to witness him genuinely struggle through a back that was breaking apart.” “He was on half-back, forget one leg.” And I’m sure he ran around the Boston Garden simply to loosen up before the game. Then he attempted a triple-double.”

After that, Fox, who played for the Celtics for six seasons, reflected on how inspiring it was to witness the Hall of Famer battle through his agony and play a career-high 54 minutes.

“It was simply the most wonderful NBA experience for me as a rookie,” Fox recounted, “because I had seen Larry be Larry on television for years but hadn’t seen it in person.” “It was the aspect of playing with [the Celtics] that I was most looking forward to.” But he couldn’t do it every night because of his physical limitations. But, wow, he did it for that night, and that was something incredible.”

Despite his brief career, Larry Bird is remembered as one of the game’s finest players.

Bird, who was known for his competitiveness, was forced to miss six of Boston’s ten playoff games in 1992. On May 17, he played his last game with the Celtics, scoring just 12 points in a Game 7 defeat to the Cleveland Cavaliers. Larry Legend is one of the finest players to have put on a jersey for a variety of reasons, including his tenacity.

Bird appeared in the All-Star Game 12 times in 13 seasons, with the exception of 1988-89, when he missed all but six games due to an operation to remove bone spurs in his heels. He was also named to ten NBA All-Star teams, nine of which were First Team, and three All-Defensive Second Team honors.

The Indiana native finished his career with three MVP awards and rings, two Finals MVP awards, and a Rookie of the Year honor. Even though he’s only played the eighth-most games in team history, he’s still third on the Celtics’ all-time scoring chart with 21,791 points. Bird is also second in win shares behind Bill Russell, the 11-time champion, establishing his status as one of Boston’s all-time greats.

Bird was no longer the player he once was by the time his career came to an end. Larry Legend, on the other hand, reminded everyone how wonderful he was on that one memorable night versus Portland.

Larry Bird was dubbed “the Best Player Ever” by a fellow Hall of Famer.

The post Larry Bird Was Injured But Still Scored a Legendary Triple-Double in His Final Month of Play: ‘Forget One Leg, He Was on Half-a-Back’ appeared first on Sportscasting – Pure Sports.

How Many Times Have the Tampa Bay Buccaneers and Philadelphia Eagles Met in the NFL Playoffs?