Russell Wilson and the Seahawks have had an on-going, dreadful marriage for years. But one shocking stat just might prove that both parties are better off without each other.

Russell Wilson does not seem to be himself.

Whether it’s due to the state of his surgically repaired finger, the supporting pieces surrounding him, shady coaching, or a mix of reasons, the future Pro Football Hall of Famer has fallen short of expectations since returning to the lineup a few weeks ago.

Wilson, on the other hand, has struggled since before he suffered the most well-publicized finger injury in history. When you stand back and look at the situation with the Seattle Seahawks, a startling statistic encapsulates why the great quarterback and the only team he’s ever played for need to part ways.

On Monday Night Football, Seattle’s season took a turn for the worst.

The Seahawks have been one of the league’s most disappointing teams this season. Pete Carroll’s team, which has been a perennial championship contender since Russell Wilson was drafted as a third-round choice in 2012, is now in last place in the NFC West division, which includes the 6-5 San Francisco 49ers, the 7-4 Los Angeles Rams, and the 9-2 Arizona Cardinals.

Wilson’s loss to a major finger injury that necessitated surgery has undoubtedly contributed to the Seahawks’ unexpectedly poor 3-8 record. However, the fact that they’ve lost three consecutive games with him at the helm has created serious doubts about the franchise’s future.

Wilson, after all, turned 33 on Nov. 29 and had his agent reveal a list of clubs he’d be willing to play for over the offseason, which created a flurry of trade rumors and comments regarding the team’s current status. The Seahawks saw their modest playoff dreams go up in smoke after losing to the Washington Football Team on Monday Night Football.

Now that they’re no longer in contention for the Lombardi Trophy, it’s only natural to speculate whether their Canton-bound quarterback would want a change of scenery in spring.

An eye-popping statistic demonstrates why Russell Wilson has to find a new home in the NFL. 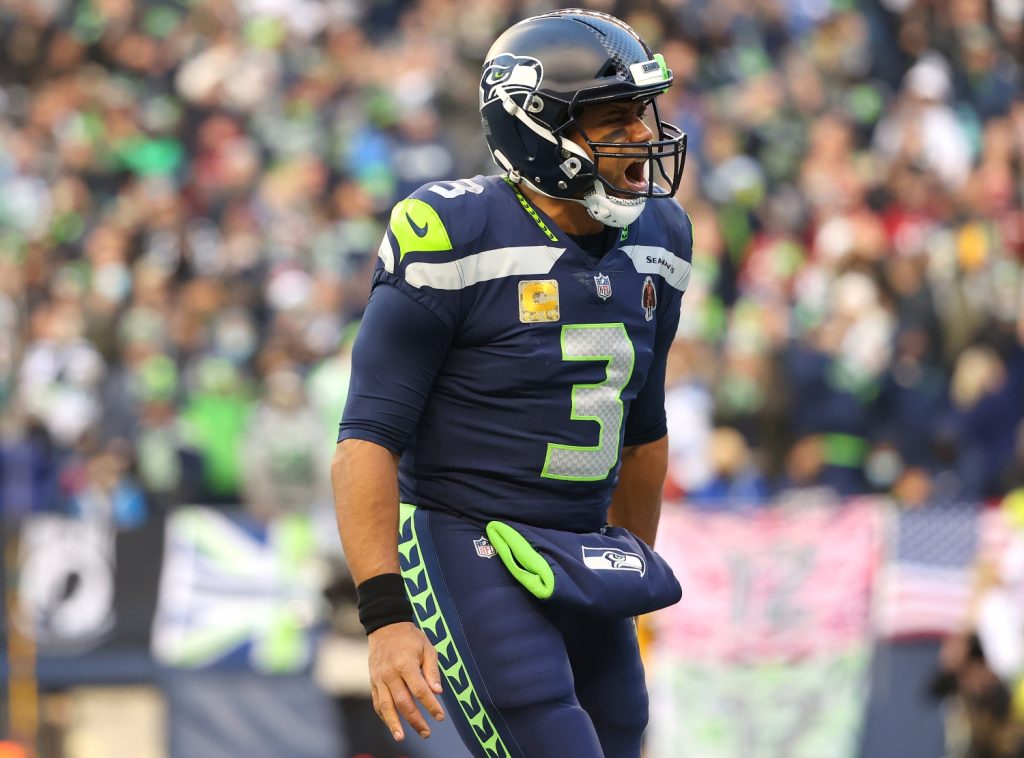 Russell Wilson, the quarterback for the Seattle Seahawks, hasn’t had much to celebrate about this season. | Getty Images/Abbie Parr

If you believe in the adage that “statistics never lie,” it’s tough to overlook the reality regarding Russell Wilson’s connection with the Seattle Seahawks.

It has to come to an end.

And a single statistic demonstrates why both parties must travel in opposite ways.

Wilson has completed just 38% of his third-down throws this season, according to ESPN Stats & Info. That would be the lowest score a qualifying quarterback has received in over two decades. In 2004, Mark Brunell, a former Jacksonville Jaguar, had a 36 percent completion percentage on third-down passes. Wilson’s poor success record on third downs this season should cause everyone to wake up to the truth of the problem, as he presently ranks 13th in lifetime completion % (65.0).

How can one of the most accurate and clutch quarterbacks of the previous two decades have such a low completion % on the most crucial down? On the one hand, it might be related to the surgically repaired finger and the resulting wear and strain on his body.

However, we can’t overlook all of the other elements that go into that figure.

What about Seattle’s offensive line, which has been widely panned and is, to put it kindly, underwhelming? In Football Outsiders’ pass protection rankings, the team is ranked 31st. Wilson’s “protection” unit had an adjusted sack rate of 9.8 percent, according to their estimations. Only the Chicago Bears, with a rate of 10.7%, had a higher rate.

What about Carroll’s offensive coordinator selection?

After three years of letting Brian Schottenheimer run the show (a dubious choice in and of itself), the Seahawks signed Shane Waldron, a veteran Sean McVay assistant.

After finishing seventh in points and 17th in total yards last season, they are now ranked 25th and 31st, respectively, after 11 games. While the injury aspect is unavoidable, the offense lacks a distinct identity, which has to do with personnel as well.

Divorce is the greatest option for both parties.

I’m curious what a Russ trade deal might look like after this season, given his age and hefty cap costs (prob a new contract with a trade anyway)

Still a star, and there are plenty of ‘a QB away’ rosters willing to pay a premium for him.

That is, of course, John Schneider’s obligation. And, after making so many outstanding decisions early in his career, the seasoned general manager hasn’t done a good enough job of surrounding Wilson with the appropriate pieces.

He did, after all, pick Tyler Lockett and DK Metcalf. Schneider, on the other hand, squandered a first-round choice in 2016 on Germain Ifedi, who never developed into a top offensive tackle in Seattle. In 2017, he again made poor decisions by selecting Malik McDowell and Ethan Pocic with second-round choices.

Let’s not forget the shocking choice to choose Rashaad Penny over Nick Chubb in the 2018 draft, or the use of a 2019 first-round pick on L.J. Collier instead of an offensive tackle. Rather than wasting their first-round pick on a defensive end who didn’t impress anyone with his pre-draft numbers (4.90 40-yard dash, only 25 reps on the bench press), the Seahawks would have been better off going with the ultra-versatile Elgton Jenkins (who ended up in Green Bay) or even Erik McCoy, who currently plays quarterback for the New Orleans Saints.

Finally, Wilson’s problems on third down encapsulate the current predicament in Seattle. Poor pass protection is the result of a GM’s poor personnel judgments, which have been on the decline for many years. The coaching staff never appears to hit all of the proper buttons, or even have a clear idea of how the offense should be run. The Seahawks’ best option is to go all-in on a thorough rebuild, which would include dealing their longstanding quarterback for multiple first-round selections to be used by a new front office and coaching staff.

Meanwhile, as he nears the end of his career, Wilson will have the opportunity to take over a new organization. He’s played behind an overmatched offensive line for far too long, and he’s squandered far too much of his prime trying to carry offensive coordinators who lack creativity and vision.

He deserves a new start and a chance to contend for Super Bowl championships at this point. And completing 38 percent of his third-down passes for a Seahawks team that needs significant improvement in multiple areas won’t get him any closer to a second ring.

Both parties should take a step back and look at the broader perspective in this matter. Russell Wilson had a fantastic stint in Seattle, but now it’s time for him to find a new home.

It’s also time for the Seahawks to rebuild from the ground up in 2022, with a new general manager, head coach, and quarterback.

Davante Adams Blows Smoke at Jalen Ramsey and Odell Beckham Jr. Ahead of Rams vs. Packers